Standard View has customizable top and bottom toolbars, which can be used to "pin" buttons for a variety of useful functions.

The top toolbar contains the standard OS window controls (close, min, etc). On Windows, it also contains the Menu Bar (File, Edit, View, and other drop-down menus). On the Mac version these are integrated into the OS menu bar.

The bottom Toolbar contains a flexible status display, which lists the number of files shown in any selected view, and other information about current processes in Media Center (such as background tagging operations).

The bottom toolbar's Status Display with one file selected. 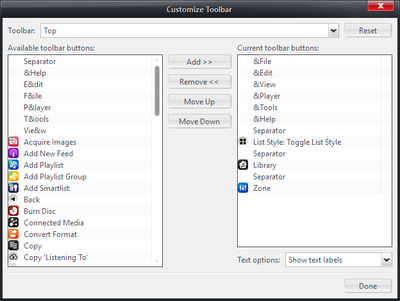 By default, the Toolbars are empty (aside from the drop-down menus on Windows). However, you can add your own set of buttons which provide quick access to a variety of functions within MC. To customize the toolbars, right-click on one of them and choose Customize Toolbar to open the Customize Toolbar dialog.

This dialog allows you to choose which buttons to display in each Toolbar, and rearrange the items displayed. You can also add Separators to divide buttons up into groups (as shown in the screenshots above).

If you use multiple Libraries or Zones, you may want to add the corresponding buttons to one of your toolbars, as they provide a quick way to switch between your different Zones or Libraries. Other useful buttons include: