Difference between revisions of "MrC-temp"

This is MrC's scratch space for work-in-progress Wiki pages.

Media Center provides a simple programming language that enhances and enriches its overall user interface and usability. This language, commonly called the expression language, is simple to learn, simple to use, and can greatly enhance your experience using Media Center.

Expressions are ubiquitous throughout Media Center, used in areas such as:

The Anatomy of an Expression

As mentioned above, an expression is a mixture of text and function calls (and some reserved stuff described shortly). The simplest expression would be some basic, literal text, such as A good movie. The expression engine evaluates this expression, finds nothing special, and then outputs the result: A good movie. Simple.

But simple text only has so much utility. The ability to transform or generate content is much more interesting and useful. And this is when functions are employed. Media Center provides many functions, which when called, produce some output. Most functions require some form of input, called arguments, and most functions generate output. By supplying a function with various arguments, the function will return some output value which is just more text. And this output text can be the used by other functions, and so on. Each function has a unique name, and calling upon a function to do some work requires little more that using its name anywhere in the expression.

The syntax of the function call is the function's case-insensitive name, immediately followed by an opening parenthesis character, one or more comma-separated arguments, and a closing parenthesis character. Whitespace after the commas is optional, but helps readability and formatting. And each argument itself is also just an expression. And some arguments are optional. If an argument is optional, it can be omitted and its default value will be used. If the argument is omitted, a comma-separator will still be required if additional arguments follow. The following example uses the FixCase() function to change its input to Title Case:

The result is A Good Movie.

A slightly more complex expression example consists of both text and a nested function call:

Inner functions are called before outer functions, so the Replace() function is call first:

in turn outputs A Great Movie. Now that the functions have produced their output, the final output, including the literal Wow! leading text is

The expression examples thus far have been limited to static literal text. Expressions have much more utility when they use data from other sources, such as a file's metadata. Media Center maintains this metadata in its defined fields. This data is accessed using the Field() function, and its first argument is the case-insensitive name of the field to be accessed. For example, the function call field(album) will return the current* file's value for the album field (* more will be said later about the current file). If the album field contained the value After Hours, the expression:

would produce AFTER HOURS. First field(album) is evaluated, returning After Hours. The FixCase() function is supplied with this output as its first argument, and its second argument is 3, which happens to specify that it should perform upper-casing.

Because fields are so frequently used in expressions, an abbreviated form exists for accessing their values. This makes it easier to both read and write expressions. Nonetheless, both forms are equivalent. The abbreviated form is simple: immediately surround the field's name with opening and closing square brackets, for example, [album]. The previous example is now written more simply as:

For the sake of simplicity and clarity, the section above glossed over an important detail regarding how Media Center outputs field values. Recall that Field() is the function used to return the value of a specified field. But Field() also has a second argument that indicates the format of the value that it returns. Because field values are used in a variety of situations, the Field() function can produce output suitably formatted for the requirements. There are two forms of output: one is a nice, friendly human-readable format suitable for use in views or other display locations; the other is a raw format which returns the representation stored internally by Media Center which is useful when uninterpreted values are necessary.

By default, Media Center always outputs the friendly format, so expressions sometimes need to take this into account and chose the format accordingly.

Not used earlier because it is optional, the second argument to the Field() function selects the mode of output: the value 0 selects the raw mode, and the default value of 1 selects the friendly mode. Here are two examples using the date field, the first one outputs the date value in raw format, the second in the friendly format:

The Media Center expression language does not strongly differentiate between the numeric value zero 0 and emptiness for numeric field types Integer and Decimal. And in some cases, the numeric value of 1 is treated similarly to the empty value.

When a value of 0 is entered as a numeric field's value, the raw value will be shown as 0, but the display format (as in the file list) will be shown as empty. The empty display allows for less visual noise in the user interface, since a column full of 0 values is not usually helpful. In fact, if you attempt to set a numeric field's value to 0 in the file list, it will immediately be displayed as empty.

Generally this difference is unimportant, except when testing numeric values with IsEmpty() or IsEqual(). It is easy to be fooled when testing such a value if the value shown in a file list is empty. The values shown in the Tag Action Window will reveal the actual raw value, as will an expression column using the field's raw format.

Another consideration for integer fields is that when sorting, a 1 value can sometimes sort indistinguishably from an empty value. The Integer type disc # field is typically empty when an album consists of only one disc, and as such, Media Center will sort the disc # values of empty and 1 identically.

The friendly output of a field can differ, depending on context. For example, in a file list, and empty field will be shown as blank, but in the Rename, Move & Copy tool, it will be output as Unknown Disc # (this ensures no blank values are generated as path components). To test such a field, always use and test against the raw format, and then expressions will be context agnostic.

Now that the basics have been covered, the more rigorous rules of the expression language syntax can be described.

How Expressions Are Evaluated

Media Center will respect the Windows locale setting for output values produced by certain functions, and within the values of certain fields. This is important to consider when writing expressions that consume such values. Under most circumstances, such values cause no harm. However special care must be taken with functions that require the use of period as the decimal point. One such function is Math(), which always uses period as the decimal point. If your locale uses some other character such as comma, these characters will have to be converted into periods before the critical function is called. Handling this problem is not difficult. Before passing to Math() any floating point number, use Replace() first when necessary to convert the locale's decimal character into a period. Fields that cause problems are any fields that produce floating-point values, such as any Date type field in raw format (e.g. [date,0], [last played,0], [date modified,0], and [date imported,0]), or any textual field that contains floating-point values that will be used for various calculations (e.g. any of the Dynamic Range variants). Certain functions such as Now() and ConvertTime() also return localized floating-point values. Consider also that the expression parser uses comma as the argument separator. Any literal numeric values specified as a function argument must have any embedded commas escaped. 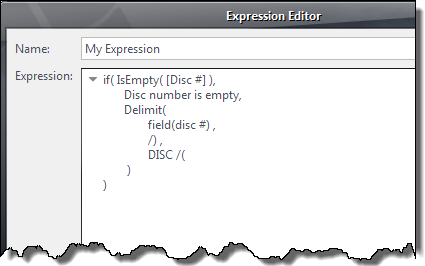 Here is a more complex expression example that illustrates the various rules discussed above regarding expressions:

The expression demonstrates that

Without the prepended = character, the literal expression text itself and not its evaluated value would be stored in the tag. The expression can refer to the field's own value to modify itself, and this offers a convenient way to perform complex transformations on field values. For example, the assignment expression

entered into an edit cell for the name field would remove four characters from the left of the name field's current value. An assignment expression can be entered into the Tag Action Window, or by using inline editing in the file list or a pane entry. The image on the right shows in-place field assignment.

Note: Undo is supported, reverting each tag to its value prior to the assignment. Redo is also supported, reapplying the most recent Undo.

The expression language is fully available to the search query engine (Search, Set rules for file display, etc.). This allows creation of more complex search queries than would otherwise be possible. An expression-based search query is any valid expression that produces a zero or non-zero numeric output. The syntax of the query is:

The IsMissing() function is run using the file name argument [filename (path)] appended by \Folder.jpg, and returns a Boolean value 1 for files that are missing, and this 1 is compared against the value numval. All these files where there was a successful comparison are returned in the file list, and all those for which the expression produced 0 are filtered from the file list. By inverting the comparison and using a 0 numval, the set of files remaining in the file list would be those that did not match.

It was mentioned already that the Media Center expression language is primarily a textual language - it consumes and produces text. Nonetheless, certain areas of Media Center are influenced by the type of data used or presented, and sometimes it is useful or necessary to coerce expression output into one data type or another. Each Media Center field is defined to be of a certain data type, listed in the Field Data Types table. These types influence how values are output, sorted, and interpreted on input. And expressions always output data of type String. By coercing the data type of an expression, output formatting and sorting can be controlled in various ways.

Data types are forced by appending to an expression the string:

where type is one of the following values:

to the end of the field's calculated expression.

The list of output in view categories and pane columns can be modified by forcing the data type to a List type. Two things happen when the data type is List: The values within a List type are split into their individual (semicolon-separated) list items The backslash character takes on a special meaning and becomes another form of separator that creates tree-like hierarchies, collapsible in panes columns and creates drill-down categories in any category view type (Standard View > Categories, Theater View, DLNA, Gizmo/WebGizmo). Forcing an expression's type to list causes this list item separation and hierarchy generation. Alternatively, forcing a List type to string defeats this. Add the cast:

to the end of an expression to force an expression's output to be considered as a List type. Conversely, a List type may be forced into a String type by adding the cast:

to the end of an expression.

Normally strings are sorted ASCII-betically with some smart numeric sorting. But this form of sort may not always be desired.

Generally it is more useful to see month names sorting such that January sorts before April, instead of alphabetically where April would sort before January. Forcing an expression's type to Month forces string month values to be treated instead as their equivalent numerical month numbers. For example, the first month January and the third month March sort before the fourth month April. Add the cast: