From JRiverWiki
Revision as of 09:15, 1 December 2010 by JimH (talk | contribs) (→‎With the Remote You Have in Your Pocket)
(diff) ← Older revision | Latest revision (diff) | Newer revision → (diff)
Jump to: navigation, search

Gizmo (shown below) is an Android app that can control your MC server wirelessly or stream music or pictures from it. Gizmo can also act as a remote control for J. River Media Center 15, controlling MC's Theater View from your phone. 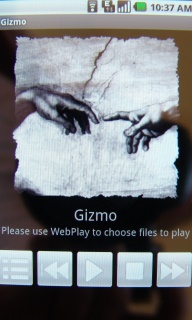