Difference between revisions of "MP4 and M4A File Support"

M4A files are simply MP4 files (MPEG-4 Part 14 container files) that contain only an audio stream (usually AAC encoded). There is no difference between a M4A file and a MP4 file other than the file extension. In fact, the M4A extension was actually not part of the original MP4 "specification" but was invented by Apple to differentiate audio-only MP4 files from video MP4 files. Other common MP4 extensions include: M4V (for video), M4P (for MP4 files "protected" with Apple's DRM system), 3gp (for Mobile Phones), and M4B (audiobooks). All of these different file types are really just MP4 files "inside" (though 3GP files are special simplified MP4 files).

In order to play these files back with MC you need to have either:

Generally, using DirectShow for playback will give better results for M4A files in MC12. DirectShow playback allows MC to use visualizations on the files, to natively convert the files to other formats, and a number of other features not available with Quicktime-supported file types. However, because most new users have Quicktime already installed (while they may not have proper DirectShow filters installed to support MP4 decoding), MC disables DirectShow support in favor of Quicktime by default. This is easy to change though!

This couldn't be simpler. Simply install Apple's Quicktime Player, which is available free of charge from Apple for a variety of platforms.

Then, make sure to open Tools --> Options --> Playback --> DirectShow Playback Settings and uncheck M4A and/or MP4 in the DirectShow Filters list. 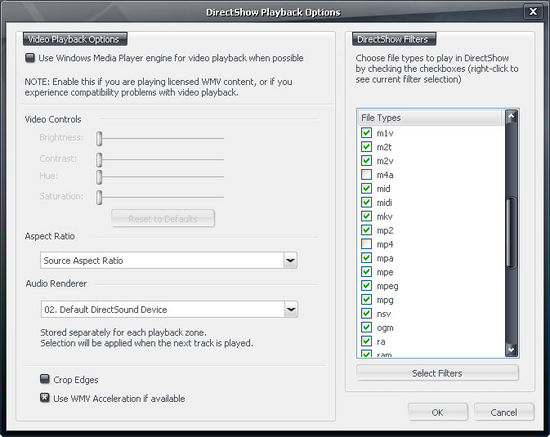 Uncheck both M4A and MP4 in the DirectShow Playback Settings dialog box in order to enable playback of these filetypes using the Quicktime engine.
Retrieved from "http://wiki.jriver.com/index.php?title=MP4_and_M4A_File_Support&oldid=4355"