2. Add a Server in Tools > Options > Media Network. Usually "Generic DLNA" will work, except if you have a PS3, XBox or Sony TV (see below).

4. Restart the copy that is running the controller and server. In a minute or two, MC will display any renderers it finds under Playing Now. Select the one you want. Then drag a file to it. This should play on the remote device.

5. DLNA Servers are displayed under File > Library. Once you select one, you can browse its library as if it were a normal MC library.

1. You need to find the public Web Radio streaming URL. Sites like these for the US [1] and Australia [2] let you browse the Radio Stations and copy the streaming URL. 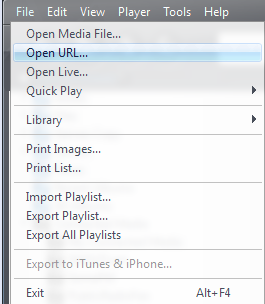 Note: There seems to be several formats for Streaming Radio and some of these links don't work with all DLNA renderers.